A couple years ago, my father-in-law kept talking about going “leak hunting”. That sounded like what we do at the Terminal on rainy Saturdays to find drains that need to be repaired. What I didn’t realize was that he was talking about leeks, not leaks.

You may be familiar with leeks that you find at the grocery store, but wild leeks are a bit different. For starters, they’re much smaller. They’re similar to a scallion onion in size, but more leafy, with a taste that’s a cross between onion and garlic. Wild leeks are also called “ramps” in certain areas of the country, and they grow in most of the eastern states and into Canada. Turns out that there are a few areas in the southern tier where you can simply pull off the side of the road and go dig yourself up some.

My father-in-law has been hunting leeks since he was a kid (as has Amanda), so a couple years ago I got to tag along as well. Returning from a successful leek hunt results in the mythical “wild leek pork roast” so the stakes are high. The process, which we repeated last weekend, first involves driving to the secret location. Leeks are only readily visible early in spring, where they pop out of the ground about the same time the daffodils do. Last weekend was perfect weather and the right time of the year to spot the buggers, so off we went. After arriving at the secret location, the half an hour of hunting resulted in unearthing nothing more than a large rock with a bunch of fossils embedded in it [which I took]. Disappointed, we hopped back in the car and decided to drive down to the end of the road, when what to our wondering eyes did appear, but the real secret leek location. It was so secret, we forgot where we left it from last time. Off with shovels and buckets we went. Now around here the leeks like to grow on the sides of hills like these: 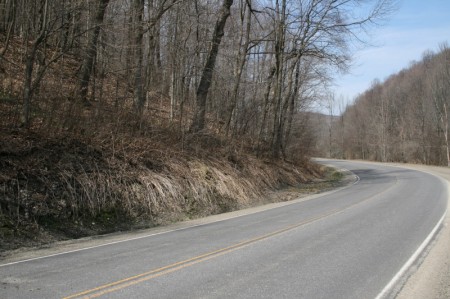 Maybe this is why they’re also called ramps. Anyways, they’re relatively easy to spot based on their leaf and stalk, and the fact that when you pick one the oniony smell is a dead giveaway. If there are enough in a certain area, the air may even smell of them. In fact, the name “Chicago” comes from one of a few Native American phrases for “wild onions” or “striped skunk,” likely because they covered the region at the time. After 45 minutes or so, we climbed back down the hill with our buckets full. 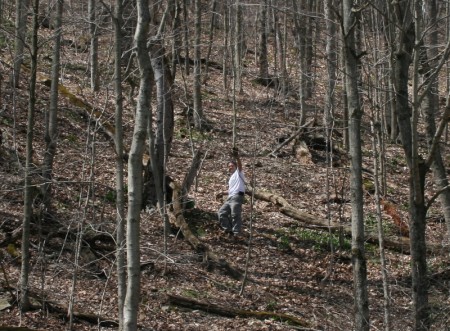 Once home, I separated the leeks out into clusters with good roots and ones that I had plucked individually. The loners got hosed down and went off to the kitchen. The remaining ones got replanted in our new yard, where hopefully they’ll take and spread next year. 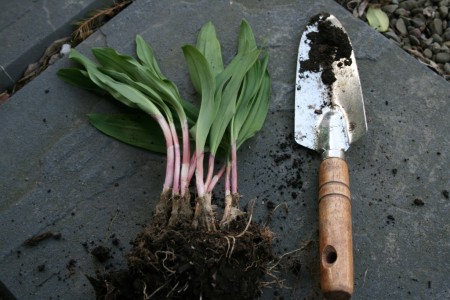 We’ve only ever made one thing with the wild leeks, and it’s a ridiculously simple dish – wild leek pork roast. Prep the leeks by thoroughly washing them and cutting off the roots. Everything else can stay, from the bulb to the leaf. Then, simply take a pork roast, put it in a small roaster with a little bit of water, salt and pepper, and jam as many leeks in there as will fit. Toss it in the oven as per the directions for the roast (or the guidance of your meat thermometer) and enjoy the savory aroma that will soon fill your house. The roast will then fill your tummy.

I’ve never seen wild leeks sold in any produce sections, and that’s what makes this meal so special. It’s one part adventure, one part culinary experiment, with a dash of hunter/gatherer thrown in. It’s worth it to make something once in awhile that’s a bit more unique than what you could just throw together from the grocery store. 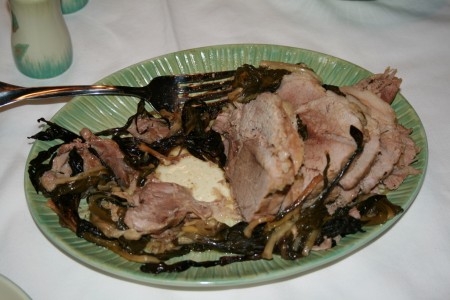 I was importing a bunch of photos into Lightroom last night and ran across this one. After a couple minor corrections I’m loving it now.

Amanda’s Aunt Fran has written a lot of music in her years, but none of it has ever been recorded. We acquired a folder with several of her pieces and picked a song to record for her. Her sheet music consisted of the melody and lyrics, so I spent a few nights working out the…

BuffaloPundit posted an email he got from a downstate toll collector… Hiâ€¦ I was reading about the removal of the tolls in the blog, and caught the line about â€œeverybody winsâ€. Not everybody. Thereâ€™s about 150 of us down here maintaining I-84 that have no idea one way or the other about your toll booths….

Once again, the government’s attempts to fix “problems” they are incapable of fixing will screw us, the consumer. The latest energy bill has a provision to ban incandescent light bulbs. From the Chicago Tribune… “In this bill, we ban by 2012 the famously inefficient 100-watt incandescent bulb,” said Rep. Jane Harman (D-Venice), who co-sponsored that…

BuffaloPundit has been writing an excellent series of posts on the misnomer movement down in Bass Pro land. Frankly, I’m getting sick of the Tim Tielmans that are tarnishing the respectable “preservationist” moniker that many of us enjoy. Every time someone embarks on a personal battle to protest the latest development and they tack on…

So, this is the weekend where I finally get to upgrade our internal Lotus QuickPlace environment (a system which I’m responsible for) to the semi-current 6.5.x release. We’re still running the ancient 2.0.8 version, which has been out of support for eons already. I wrote my original plan to upgrade this system to version 3…