This year marks the tenth that Amanda and I have been volunteers with the Central Terminal Restoration Corporation, and my fourth serving on the Board of Directors.  The CTRC is in the best position it’s ever been in to succeed and move into the future, and with that knowledge Amanda and I are both “retiring” from our roles.

It’s tough to leave an organization that you’ve been so heavily invested in for so long.  I went from being just one of the volunteers, removing broken glass and boarding up problematic access points, to being on several committees, to serving as PR lead, volunteer coordinator, IT guy, and eventually being elected to the Board and as Treasurer.  Amanda similarly served in a number of different roles – as merchandise coordinator, volunteer coordinator, and this year developed the CTRC’s first official docent training program.

I’m amazed and proud at how far the organization has come.  We’ve grown our income by leaps and bounds.  We’ve put out a master plan, showing how the building could be redeveloped in a phased approach.  We’ve landed grants from a number of organizations, including a $300,000 grant from New York State for canopy restoration and two grants from the Wendt Foundation which have allowed us to fund an executive director.  We’ve brought national media attention to the building on a number of occasions.  Most importantly, we’ve completed the first phase of replacing the roof – a major step in rehabilitation of the Central Terminal.

So why leave?  Life is different today than it was ten years ago.  When Amanda and I started, we were just married and had no kids.  I was blown away by the Terminal and the fact that such an amazing building existed in Buffalo that I never even knew about, and I lived in WNY my whole life.  It was clear that the building and the organization could use all the help it could get and I had time to give.  Now, we have a daughter starting kindergarten and a preschooler still at home.  Our weeknights and weekends are more precious than ever.  Career-wise, I’ve moved up the ladder and as such things go it requires more time and focus.  I frankly don’t feel like sitting in front of the computer for a few hours in the evening after being glued to it all day anymore.

The organization is different now as well.  We have a Board of Directors with a much wider range of skills and experience.  We have an Executive Director who can serve the daily needs of the organization.  We have more volunteers serving as leaders in key roles.  The CTRC’s focus now isn’t on basic fundraising events and keeping the lights on, but major restoration and preparation for tenants.  It’s not the scrappy scramble that it used to be, which is a good thing, even if I do miss it from time to time – the feeling that individually you are essential to the success of an event, a project, or a goal.  Of course, the organization can’t grow and thrive if it never advances past that stage, and I’m comfortable in knowing that I’m stepping back at the highest point thus far in the organization’s success with a group of talented people pushing it forward.

I chose to “retire” from the Board on September 1st – Mike Miller Day, as proclaimed by the Mayor of Buffalo at Mike’s wake four years ago.  It seemed fitting, given that it was Mike’s enthusiasm and inclusiveness that cemented my dedication to the CTRC, and his unfortunate passing that ultimately led to me serving in a greater capacity.  I’m sure Mike would be proud of the work that Amanda and I, and the entire organization has done in his absence.  I look forward to being at the Central Terminal’s grand re-opening celebration some day, knowing that we played a role in it’s survival and revival. 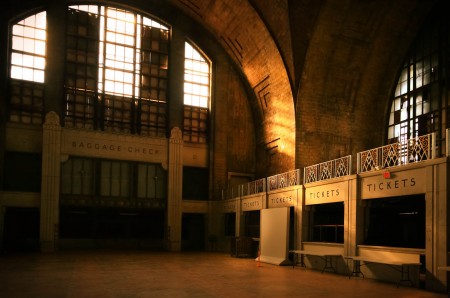