When we moved into our house it came with an “old style” top freezer refrigerator.  We had a side-by-side that we brought with us that was much more modern, and had a built in icemaker and water dispenser, henceforth known as the “good” fridge.  Unfortunately, there was no water line to where the refrigerator is in the kitchen and no easy way to run one there, as the kitchen is slab on grade concrete and the basement is on the opposite side of the kitchen from the fridge.  So we kept the fridge that came with the house in the kitchen and put the “good” fridge in the basement where we could hook up the icemaker.

Since we were going to be replacing the nasty carpet in the kitchen with a new snap-lock laminate floor, I found a way that I could run the water line to where it needed to go and bring the “good” fridge upstairs.  We measured, twice, three times before we put the floor in to make sure it would fit and it would be worth buying the plumbing supplies needed to run the water line.  The good fridge was a little bigger than the bad one, but it looked like it would fit.  So I bought the stuff from the very helpful plumbing department guy at Home Depot, and then bought the correct tubing from a plumbing supply store because the helpful plumbing department guy at Home Depot sold me the tubing that explicitly says not to use for an icemaker.

The floor was in, the tubing was snaked through all the places it had to be snaked through, now it was time to bring the good fridge upstairs.  Luckily, my Dad volunteered for the job and was able to bring an appliance dolly with him – the good kind with treads on the upright part so that it goes us stairs relatively easy.  Of course, we knew that the good fridge wouldn’t fit through the door frames without removing the doors, so we cleaned the fridge out, unplugged it, turned the water off, disconnected the water line, removed the doors (which of course involves disconnecting some electrical components and decoupling the water line that runs into the door) and loaded it up on the appliance dolly.  Up the stairs, one at a time, we lugged the fridge, turned the corner into the kitchen, got it into position leaving just enough room to get behind it and hook it all up.  We have to put the freezer side door back on and hook up the water line and the electronics to test it, so we do, then I climb behind the fridge, hook up the new water line, and now need to make sure that it’s not leaking, because a leaking water line would be really really bad on our new snap lock laminate floor, which while I sealed the perimeter gap with silicone, could still go undetected for quite some time, seep into the floor panels, and ruin them completely.  So…  moment of truth…  turn the water back on and….  nothing happens.  We’re trying to use the water dispenser and no water is flowing.  We keep the valve open for a couple minutes, thinking the water just needs a bit of time to snake through the 30 or 40 feet of hose, but still no go.  So into the basement I go to check the valve, which of course turns out not to be open all the way.  Open it, and then back upstairs to watch the water.  This time, it’s made it almost to the fridge, but seems kind of stuck in the last 5′ of tubing.  At a loss for what to do, I loosen the fitting on the back of the fridge thinking maybe we need to bleed the line a bit, which moves the water the rest of the way there, but still nothing coming out of the dispenser.  After a few minutes of creative thinking I remember that the water automatically shuts off when the refrigerator door is open, and we hadn’t bothered to put it back on yet.  I key the fridge door switch and immediately the water starts flowing.  Huzzah!  Check for leaks…  and….  none!  We are in the clear!  We put the refrigerator door on, carefully bundle up the water line so it doesn’t get kinked or run over while we push the fridge into place, and… wait a minute…  how can this be?  It doesn’t fit under the cabinet and into it’s designated home!  But…  we measured!!  Three of us measured it!  Except that we measured it before we put the new floor in, which happened to be a little bit higher than the old carpet and was now obstructing us a whole… 1/8″.

Now, we have a dilemma.  Do we admit defeat and say it can’t be done?  That this refrigerator just doesn’t fit into this kitchen?  No!  Fuck this cabinet, we say!  Let’s rip the damn thing out and reinstall it an inch higher!  So…  out comes the ladder and the pry bar and the power tools and we rip the molding off, and we unscrew that cabinet, and now we have all the height our hearts desire!  So…  we push the fridge ever so gently into place.  Check the water…  still working!  Open the refrigerator side door – lights are on, temperature is dropping!  Open the freezer side door…  except it gets stuck about a third of the way open.  Huh?  Check to see what it’s binding on…  and it’s…  the wall.  The good fridge fit width wise into the space, but it was so tight that there wasn’t enough room for the freezer door to open since it was on the wall side of the space in the cabinets.  We pull the fridge out enough for it to allow the freezer door to open, but it’s too far out into the room and gets in the way of walking into the room.  Our only option now is to move an entire row of cabinets, which even we weren’t stupid enough to attempt.  We were defeated.

Pull the fridge back out.  Unplug.   Turn the water off.  Disconnect the water line.  Unscrew the doors, unhooking the electronics and the water line into the door.  Hook it back up to the dolly, lug it back down the stairs.  Move old fridge back into it’s place, which it’s now enjoying the new skylight view since the cabinet that lived above it has been ripped out.  Hook the water line back up to the good fridge in the basement, plug it back in (this actually involved a comical side project to replace a single gang box with a double gang box that involved the stripping of multiple screws, but we’re already over 1100 words here), test the water, and surrender for the night.  You win this round, house.  Well played. 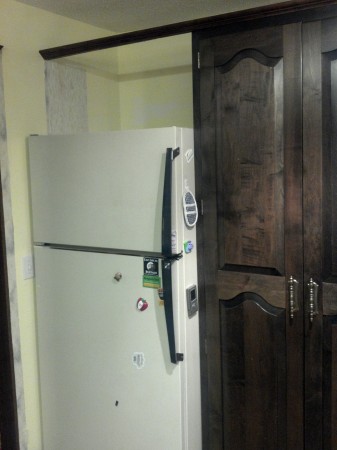 I’ve always wondered what this building was, because I drive by it every day. Now, thanks to Buffalo Rising, I know. Update: Thanks to a commentor for posting this link to a UE’rs photographs of the inside. Looks to be in much worse shape than the Terminal, but hard to tell whether it’s salvageable or…

Not too long ago I wrote about Time Warner’s Home Phone service not being that great a deal, when price compared to Verizon’s VoiceWing service. While that still seems to be the case, I’m having a much bigger problem with VoiceWing lately. Two actually – the service and the support. My VoiceWing service has several,…

Three weeks in a row, three great events! Thanks to all the volunteers who helped out to make Oktoberfest run smoothly this year. And, of course, thanks to all the bloggers for unplugging for awhile and coming out to have some fun! Great seeing you all again!

It’s a beautiful snowy Sunday out here in the country. Here’s a simply modified photo, using only Picasa’s Focal B&W and soft focus filters. I think it makes a relatively dull photo (below) into something much more interesting.

For my birthday this year we decided to take a drive down to Watkins Glen. The trip ended up being three parks – we stopped at Stony Brook for lunch on the way down, then to Watkins Glen, then at Letchworth on the way back. We dodged a lot of rain, but stayed dry and…