There’s no doubt that 2008 was a big year for the Punaros. Most of the year centered around the birth of Ariella, but it was also our first full year at the new house in Holland, and as any homeowner will tell you, that’s the busiest year of all as even our move-in-ready-condition house was subjected to some tweaks (hardwood, new standby generator, partial roof replacement, new gutters, bathroom remodel, painting).

Amanda also left her job at M&T in 2008 to take on the new role of Mom. We planned for that in our budgeting, but in 2009 we will be a one income family, which I’m hoping to turn into a new informative series of blog posts.

I dove a bit deeper into photography and there appears to be some payback for that, as I actually sold a photograph for use on a book cover! I’ll have more information about that soon, hopefully.

Amanda and I had our 5 year anniversary in 2008. The time just flew by!

I traveled to India and China for work, which was quite the experience.

Even though we gained one Punaro, we lost another. It’s always sad to see a beloved family member depart.

In my own personal blogging world, I ventured into the world of Twitter, which has helped fill in the blanks between blog posts. The Aquarama was finally extracted from the Buffalo waterfront, then towed to Turkey to be scrapped. The Skyway continues to be a source of controversy, even though there are still no facts to support removing it, and the Central Terminal continues to survive, even thrived in 2008 by tapping into the paranormal investigation market.

So 2009 promises to be another interesting year. We’ll be watching Ariella grow up faster than we can believe. So with that, I leave you with a photo of her enjoying Christmas 2008. May your 2009 be the best year of your life yet! 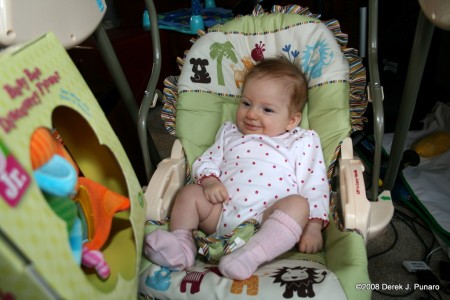