One of the cool “add-ons” to geocaching are Travel Bugs. Travel Bugs (or TB in shorthand) are items that move from cache to cache. You purchase a travel bug, which includes a set of dog tags that are stamped with a unique serial number. One tag you attach to an object of some sort, one you keep. When you register your TB online, you can give it a mission – like “take photos of me in front of lighthouses” or just release it into the “wild” and see where it goes. You drop it into a cache and another geocacher will come along, pick it up, read the description of it, and presumably move it along to another cache closer to it’s goal.

I bought Amanda a couple travel bugs for Christmas 2005, and since we went to Disney World the next month we decided to make one of them a Disney Bug. We bought a keychain, attached the tag to it, and dropped it into our cache when we returned home. 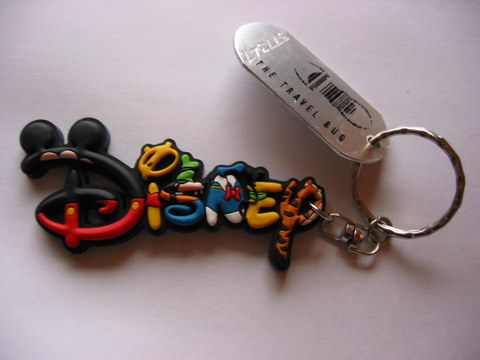 It promptly disappeared, as often happens with travel bugs. An “offline cacher” (someone who geocaches, but doesn’t log their finds online) either picked it up, or someone “muggled” the cache (a non-geocacher found the cache and took it’s contents), or someone simply forgot to log it. For two months, there was no trace of our Disney Bug. Then, miraculously, one day a cacher logged it, saying he found it in a cache near Cleveland! It was saved and sent on it’s way.

By July, our Disney Bug made it’s way back to Orlando, and a caching family took photos of it (and them) in all four Disney parks.

Since then, not much has happened with the bug. It had been meandering it’s way back up the east coast, waiting for a determined cacher to pick it up and move it further west so it could go to Disneyland. Yesterday, though, we got quite a shock. It’s always interesting to get a notification email saying your travel bug has moved, and then see where it is at the moment. Amanda and I both did a double take yesterday when we saw it’s new location:

Our travel bug was in South Africa?!? How? Why? We read the note that the cacher wrote, “Will take a pic in front of the Castle in Cape Town South Africa.” Ah! They decided to take a little bit of liberty with our instructions to take a photo of it in front of each of the Disney castles and get a photo in front of a real castle. The photo hasn’t yet been uploaded, but we’re certainly looking forward to seeing it!

Geocaching.com will automatically create a map in Google Earth of where your bug has been. This one is pretty wild, because you can’t even fit the starting and ending points on the map at the same time.

We weren’t originally intending for our bug to go overseas, at least not until it had hit the U.S. parks first, but since it’s now halfway around the world, maybe it’ll get a chance to go to Paris, or Hong Kong, or even Tokyo. One thing is for sure – it’s certainly travelling further away from home than either of us ever have. If we win the lottery, I think it would be fun to try and catch up with it. Can’t decide where to go on vacation? Follow the bug! I bet you’d see some interesting places!

A few months ago, I mentioned the difficulty that we’ve had uncovering a specific geocache. Well, last night we finally defeated the dreaded Dam the Cayuga Cache. Maybe it was that we both had reached our 50 cache milestones. Maybe it was that we were carrying the Lighthouse Nickel Travel Bug with us, and we…

From the makers of Google Earth comes… Google Mars! Click on Spacecraft at the top to have it overlay all the touchdowns (successful and not). Sweeeeeet.

I’ve posted all the other Terminal events for October… except for this one – Doors Open Niagara 2006. The Terminal will be participating again this year both days – Saturday 10/14 and Sunday 10/15 from 10am-5pm. The Terminal is even the… ahem… poster child for this year’s event.

Craig wonders if the plans for demolishing the Skyway are wider-reaching than most people think. “Skyway” is local shorthand for the Skyway bridge. But when the I-190 was built in the 1950s, Skyway was the term used to describe the entire portion of the Niagara Thruway that was elevated above street-level — approximately that part…

Courtesy of Caffeinated Gonzo, this buffalo, located at the University of Buffalo north campus, is a recast of the plaster-cast bronze painted buffalo that was located at the Central Terminal. When UB was looking to have a statue made for the campus, they did some historical research and found the original molds used to cast…

Red reminded me of something I wanted to mention here. It was damn windy yesterday. I drove over the Skyway on my way home. It certainly blew the car around a bit. I would imagine those going over the Grand Island bridges had about the same experience. So did those using the 90E/290W interchange. Or…